6 Facts about Sheep in Ireland 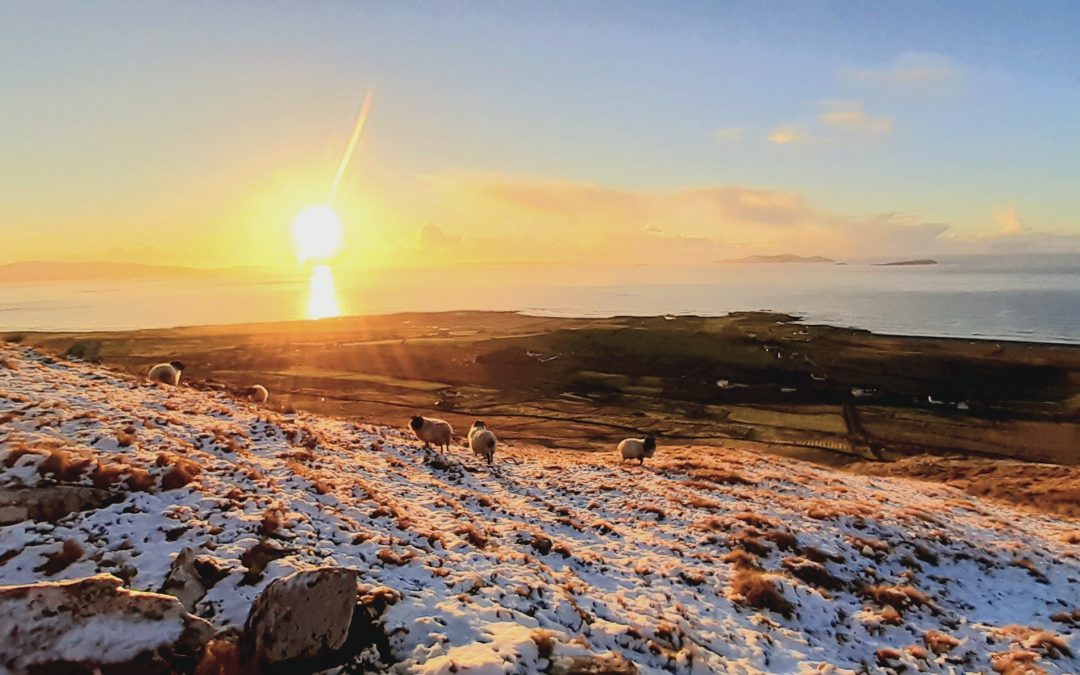 Ireland and its sheep

When you think about Ireland the image of sheep is very likely to arise in your mind. Ireland and sheep go hand in hand. These woolly creatures can be found scattered along hills, mountains and seaside cliffs. You might find them sitting contently on the side or the middle of the road. For many they symbolize the island of Ireland. From a distance they all look the same. For the farmer, every sheep is easily identified by its biology, markings, facial features, personality and nature. Did you know that the sheep you see today are not originally from Ireland but imported from various parts of Europe?

Are there more sheep than people? Numerous tourists who visit Ireland ask this popular question. According to the Department of Agriculture, the Sheep Census published in December 2019 indicates that there were 3.8 million sheep. Compared to the census published by the Central Statistics Office, Ireland has an estimated 4.9 million people. This is close, although the sheep population varies from year to year.

The sheep is a hardy animal and can live in almost any terrain. The Irish weather and mountainous landscape suits these ovine breeds. The land along the west of Ireland isn’t suitable for tillage like other areas of Ireland. But it is very suitable for sheep farming. Plus, these animals are very versatile. Sheep are kept for their meat, milk, breeding and maintaining commonages (land owned by more than one person) in good agricultural condition. Unlike other domestic animals it doesn’t cost a lot of money to buy and breed sheep. According to the Agriculture, Forestry, and Fishery statistics the European Union is deficient in sheep meat. Worldwide the sheep flock is in decline and this in turn provides an export market for the sheep farmer.

Why are sheep painted?

Ireland has many farmers with large herds of sheep. Against a backdrop of rolling hills and mountainous areas, here you will find many sheep pastures. These enclosed and open areas lead to big numbers of sheep congregating from other local farms. Because of this it is important that the sheep are marked for their owners to be able to identify them. From a distance sheep look similar and this can make it difficult to recognize them. The solution to is to mark them using a vibrant permanent color. Painting the sheep helps farmers distinguish their ewes from other flocks. It is just as important to be able to recognize the sheep of other farmers, especially if a stray is on your land. At Devlin Farm we are familiar with the markings of our neighbour’s ewes. Sheep in Ireland can be very colourful. For our ewes, we use the color green and mark them on the upper right shoulder. Besides identification reasons, the breeding season is another time of the year where marking is used. A special designed belt is strapped to the ram. Attached to the belt is an exchangeable coloured crayon. The ram mounts the sheep. There should be a mark on the back of the ewe. We use the term “tipped” in other areas of the country, it’s referred to as tupping (mating season). Both indicate that the sheep should be in lamb. If not, the process is repeated again.

Did you know that sheep are prey animals? They are naturally defenceless against predators. That means they are a naturally nervous creature. They are always on the lookout for danger. Sheep prefer to travel and gather in flocks. You will seldom see the sheep on their own (unless they are lambing). When approaching or taking pictures of these timid animals, it is important to be quiet. Too much human interaction really scares them. It is important to remember they are afraid of us humans. Especially if we gather in large groups talking loudly and making noise. In Ireland the biggest threat to sheep are dogs. How do you know sheep are afraid? They will try to run back to their flock. They might freeze and not move at all. They may start bleating and stamp their feet.

Why are sheep eyes unique?

I like nothing better than taking photographs of our sheep. Sometimes I’ve tried to take close up of their eyes. It was that I noticed that sheep eyes are unique. On closer inspection, their eyes are located on the side of their heads. I asked my husband, whom I consider an expert on sheep why was this. His reply ‘they can see all around them, but they have poor eyesight and they can’t tell how far or near things are. We humans can only see what’s in front of us. I guess everything has its positive and negative points. On closer inspection, I noticed they examine objects closely and nibble on the item to get a better feel for it. Because of their poor vision, sheep are afraid to enter areas where there are shadows. My husband also mentioned that you should never approach sheep from behind. Always come to them from where they can see you. You should always approach them slowly and calmly. They do scare easily.

Why are sheep sheared?

At Devlin Farm we shear our sheep once a year. We usually shear in early June before the weather gets too hot. In the west of Ireland shearing takes place later in the summer due to our colder climate. In other areas of Ireland Shearing season begins in April. My husband does all the shearing. He prefers to use the hand shears. He can get through 10-15 ewes per hour. We like to use this opportunity to do a full health check on the sheep.  Besides the sheep getting too hot, it reduces the outbreak of blowfly strike and maggots. Dagging is another phrase you’ll hear. This is where the farmer cuts away dirty wool, especially around the tail area. This can reduce the blowfly laying eggs around this part of the body. Many farmers use shearing contractors. These professionals use electric shears. It is fast, efficient and suitable for farmers with large flocks and want to get their sheep sheared quickly. Whether hand or electric shearing both have their place. It’s a matter of choice for the farmer.

We hope that you enjoyed this information and facts, if you’re interested in coming to Ireland to see lots of sheep, remember, there’s no better way than holidaying on a working farm: